Skip to content
(11th September written up 12th September)
At 3 o’clock Diana, one of the school staff, came to the flat to take me on me “excursion” – tour of the city centre. I think the tour had three objectives:
It would be tedeous to describe exactly the route we took, or what I saw (especially if you do not have access to a map of Novosibirsk). Alyona’s flat is about a mile south of the city centre. Diana and I set off north up Krasny Prospect (“Red Prospect”, one of the main thoroughfares), towards Lenin Square. During the tour I saw: the school, one significant church, several cultural buildings, a Metro station and a couple of parks. As I expected, (based on what I saw) Novosibirsk is not an especially beautiful city. It contains some interesting and beautiful buildings, but most is functional, some stark or even a bit “brutal”. The tour lasted an hour and a half. Diana returned me to the flat and we said goodbye until tomorrow.
Alyona and Gleb were out. My bed is a fold-away divan. I had converted it into its divan form before going out. It is covered with a loose sheet. I sat down, to type up some of these notes into my laptop, when to my surprise the sheet beside me moved! Moosa (the cat) was underneath the sheet. I was relieved that nothing bad had happened but quite amused. As there was nothing wrong, I went on with what I was doing, and left Moosa beneath the sheet (See the photo). 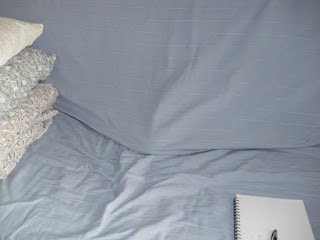 When Alyona came back, I told her what had nearly happened and showed her the bump. I deliberately used the word “Catastrophe” (which is almost exactly the same in Russian). She found this incident very funny, and said that she had a favourite movie (a British comedy of manners) where a woman accidentally sits on a small dog and kills it!
A little later, “Slava”, a lady friend of Alyona’s came to visit. I am introduced. We have tea together and they include me in some of the conversation. It is very hard work both for the guest and the host when you have limited command of the language, but we get by. One of the issues I have with Russian is that it is possible to change the meaning of some words by changing the stress. Naturally, I often put the stress in the wrong place! You mustn’t do this sort of thing unless you are prepared to have people laugh at you (in a friendly way). I ask Alyona to tell Slava about the incident with Moosa. Slava finds it funny too. A little later, Alyona gets me, and herself, supper (roast chicken and macaroni). She has found the film she referred to on YouTube and we all watch the relevant clip together. I don’t recognise the film, but it is very funny (even with the dialogue in Russian), and the entirely appropriate. I’m glad no harm came to Moosa, but the incident has certainly “broken the ice”.
A little while later Alyona goes out and leaves me in the flat. I am left to tell Gleb to have chicken and macaroni for tea! I do my journal, revision and preparation and eventually go to be. I’m writing this at 3am because my body clock is still a bit haywire!
(Sunday 11th written up in the afternoon)
I arrived at Novosibirsk-Tolemechevo airport at 5:40 local time. It was dark and wet. Once again there was a part of the airport where there were old aircraft (often with empty engine housings) awaiting dismantling. And also once again disembarkation was by bus. Of course, now there was no customs or immigration. As usual, I worried a little about whether my bag was going to emerge on the conveyor, especially when the conveyor stopped and it still hadn’t appeared. The reassuring thing at that moment was the number of other people who were also waiting for their bags. The Russians have introduced one innovation that I hadn’t come across before; as you leave the baggage reclaim room, there are security guards who check that you have the counterfoil for the bag you have claimed attached to your bourding card. If you do, they take it from you and let you pass. I don’t know what they do, if you have a bag and no matching sticker.
Once I had emerged from baggage reclaim I had to find my taxi driver. He was standing behind the crowd of “touting for business” drivers and had a clear sign with my name (in Roman characters). We confirmed identities and he handed me a “welcome pack” from the school (probably more of that later). He was rather older than me, had a walking stick and obviously had “a gammy leg”. Naturally, I pulled my own case. It’s on wheels, and my cabin baggage is a small rucksac, so it was no trouble really, but I didn’t expect him to have parked a few hundred metres from the airport building to avoid paying parking charges. It’s a reasonable thing for him to have done, but with limited language in common, it was only when he got to the car that I understood what was happening. The drive to my new home was through the “Leninsky Rayon” which is an industrial area with a number of large factories. “Rayon” translates directly as “Region”, but the usage in English implies a rather large area. For the Russian application, thinking “district” might be more appropriate.
We crossed the River Ob (which is really impressive) and turned into a residential district. After a couple of missed turns we found the group of buildings which contained my flat. Russian street addresses can be a little confusing because although the buildings are numbered, the buildings can be arranged around a square containing parking and other shared amenities, so on occassions you can see one number (and know you are in roughly the right place) but not see the number of the individual building you actually want. The main roads seem to be easier.
The driver spoke with my host on the phone, got me to the door of the building, got the host to open the door and then left me to climb the stairs to the flat (I don’t blame him, even though it’s only on the 2nd floor).
My host has left the front door open, and I came in to be greated by a friendly alsation, a black cat, and my host Alyona. Alyona lives with her son “Gleb”, dog “Boosa” and cat “Moosa” in a flat about a mile from the centre of Novosibirsk. And that means, at least traditionally, the centre of Russia! I don’t know if the flat is typical. It’s small, but comfortable. You might find the layout strange (it is to my way of thinking). The rooms are multipurpose. For example, the washing machine is in the bathroom. I think my presence is responsible for some rearrangement of who sleeps where, but I’m not sure. 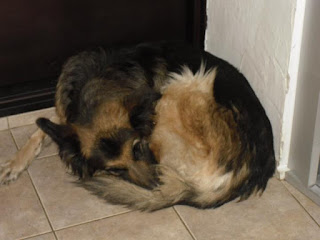 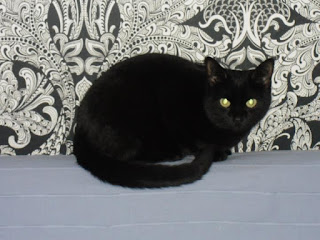 Main booking: I’ve transferred the money to “the Russians” in Siberia. That makes it pretty difficult for me to back out. It means that I have lessons and accommodation for a month.
Transport: The instructions for applying for a Russian Visa say that I should not book my flights until I have a visa. On the other hand, the requirements for applying for a visa say that I need to have a fixed itinerary (that means airline tickets). Anybody spot the circular argument here? As usual, the answer is to take the risk oneself and pay the money, so I’ve bought the plane tickets; Heathrow to Moscow Domodedovo to Novosibirsk (LHR –> DME –> OVB). I’m flying InterAvia all the way, so at least I’m not changing carriers, there is plenty of time for the change, and the change all in the same airport, which is the most modern of Moscow’s several airports. In for a penny, in for several pounds!
Visa: Always a bit of a challenge. In my case things are complicated a little by being a UK citizen who doesn’t live in the UK. Things are also complicated by me not having a regular job. However, with a bit of help from an “agent” and a certain amount of original documentation, I think I have surmounted that obstacle. I hope I will know shortly because I sent the documents, the application forms and my passport registered post yesterday. If things work as I hope, then I should have the passport and visa back in a couple of weeks. It will be all right if it takes a little longer, but I will be biting my fingernails!
The only thing left to do, apart from pack my bags, is organise transport from Ireland to Heathrow. I expect I will use my old friend Eurolines (cheap, and effective but interminable) and stay for a few days in the area to catch my breath.