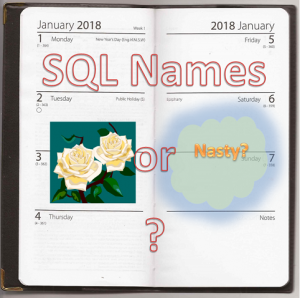 Anything written about Information Technology has to mention naming conventions. Phil Factor’s article on SQL Smells describes several smells which can be caused by poor naming of objects in the database. In this article, I am going to concentrate on naming tables and columns.

What makes a good naming convention?

I don’t think I can do better than quote Phil Factor in his original article:

“Identifiers should help to make SQL readable as if it were English.”

By “Identifiers” Phil means the names of the objects. The name of the object is to distinguish it from all the other things in the database. It does not need to fully describe the object. It is good if it tells people what the object contains, but it does not have to describe it in detail. There are better ways to do that.

By the way, SQL was originally meant to be called “Structured English Query Language” but the name was altered because of a trademark clash.

Short, meaningful names are good. Nobody will thank you for meaningless names like “T1231237” or “TEMP000”. I’ve actually seen both of those! Similarly, nobody who has to type it in is going to like really long names.

Any standards, naming conventions, or guidelines should help you to choose names which are useful where you are working. I’m not going to tell you what to do, but I am going to suggest some things to avoid, or at least to watch out for.

Naming things well is an art. Naming linking tables is especially hard. It is worth spending a little (but not too much) time on naming things. The names you choose will be referenced throughout your system and will be with with you for a long time.

Over the years, the maximum size permitted for table names has increased. That has made life easier. Really short table names practically demanded structured, coded names which were a pain. On the other hand, please don’t get carried away with long names.

Rather than provide detailed guidance on a naming convention, other than the “Goldilocks – Meaningful, not too short, not too long, just right!”, I’m going to give you a list of naming SQL Smells which should make your nostrils twitch:

When you are designing your own database, follow the local conventions and concentrate on making the names readable and easy to use.

Having dealt with the issue of naming, in the next article I’m going to look at a specific SQL Smell – “Packing lists into a column”.