Yesterday I had a slow, and rather shaky start to the day. “Groan. I don’t want to do this…”
Then I had to rush to get some stuff into the state I wanted it to be in.
And then, it all worked out as I had hoped it would. In fact it worked even better. That’s very satisfying. I guess it emphasises how optimism is a healthier emotion to feel than pessimism. Both tend to be self-fulfilling. Life is full of ups and downs, but if you can work through the “downs”, then sometimes the reward is there in the end.

It’s always nice when something goes right. Take a moment to enjoy it.

In my case I have been doing some research on the career of a missionary 150 years ago in Fiji. Just think about that for a moment…

With a little help from the Fijian High Commission in London and a couple (I’m now not sure if they are in Fiji or Australia) I’ve located a letter by the man himself, published in an Australian newspaper (and apparently “The Times”) 135 years ago. I have the text of the letter. Isn’t that amazing!

Here’s the letter from Nettleton (the missionary) (I’m the anonomous editor):

Do you take pride in what you do, in the things you make? I do. This sort of pride is sometimes described as: “feeling ownership”, feeling that something is mine, even feeling that something that I have made is “part of me”. This feeling is generally considered to be a good thing. It increases job satisfaction and motivation.
However, as with everything like this, there can be a down-side. What happens if someone criticises your work? My day-job at present involves creating design documentation for changes to an existing computer system. That means that I have to produce and take responsibility for a mixture of documents, some new (I created them) and some old (I updated them, or even some which I haven’t touched). I’ve just received a bunch of comments and, for just a moment, the “feeling of ownership” meant that these comments felt like an assault on me!
This is a common enough situation, the question is: what to do about it? In my case, the answer was to take a short walk and “dissociate”. Imagine the problem; all these comments, from different angles.

Then I imagined myself updating someone else’s work. I’ve separated myself from the emotional attachment (which was getting in the way). By-the-way, I’ve also divided the work into easy chunks, so I can concentrate on getting each “chunk” done, rather than worrying about how big it is (I’ve delegated that task to another part of me!). It has worked, and so must I! I’m off to get on with dealing with a boring but necessary task.

For those of you who are interested, I’m going to update this with some references to the relevant theories later. For now “transactional analysis” will have to do:
http://en.wikipedia.org/wiki/Transactional_Analysis

I’ve just spent a very pleasant afternoon with some old colleagues. Old in the sense that many of them are now retired, and also in the sense that it has been a long time since we worked together. We had a great time!

Naturally an event like that got me thinking about “nostalgia”. Naturally, it can be nice to think about good times in the past, but it also gives us an opportunity to revitalise ourselves, by reminding us of the skills and abilities we had then, and still have but had forgotten about. The negative side of nostalgia is that it can allow us to wallow and only think about what we have lost. 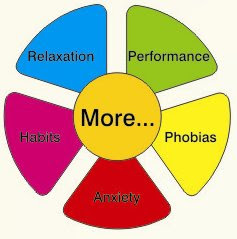 … for a hypnotherapist? The idea was to identify some of the problems or things I help people with, and associate them with colours:

I’ve also used the colour wheel and mixing to give the order.

At some time in the future, when I’ve got more money and time, I may invest in a more natural style of flower and add hot-spots to the petals. In the meanwhile you can see the real thing, live, here: http://www.duhallowhypnosis.net